Who would have thought that a week after returning from Haiti that God would provide a training ground for Crisis Response in our own back yard.  On Sunday, May 22, 2011 a devastating tornado left a path of destruction through the Minneapolis area that started in the Southwest suburb of St. Louis Park all the way to the Northwest suburb of Blaine.  The worst hit area was North Minneapolis, a relatively poor area of Minneapolis.  Many of the residents are senior citizens who have lived there their entire lives and have owned their homes forever or are renters that had little to no renter’s insurance.  This is an area that is frequently on the news due to violent crime.  The poor state of our economy hasn’t helped this area at all and many of the homes had fallen into disrepair far before the tornado hit.  Many of the landlords are absentee landlords.

With the onslaught of this crisis came a mission field of shocked and overwhelmed citizens that just needed to know that someone, anyone cared for them.  Immediately we saw neighbors stepping out of their doors and checking on other neighbors to make sure everyone was OK. Impromptu BBQ’s popped up on corners and fed hundreds in an evening. I talked to the pastor of Sanctuary Covenant Church and she said people were dropping off food both prepared and ready to eat and non-perishable food for people to take home to feed their families. At some points people didn’t even need to get out of their cars to donate items…volunteers stood on the corner and took the items right out of the people’s cars to keep the traffic moving.  Clothing, toiletries, diapers, wipes, food, blankets and anything else you can think of were donated to several drop off points.  Laundry mats were donating washers and dryers to wash items that had been donated that needed to be washed.  So many people had lost almost everything.  Most did not have electricity for the better part of a week.

We prayed about how we should help out in this situation and after several phone calls we decided to just go down, walk the streets and see where God led us. And he led us to Sanctuary Covenant Church and an organization called Urban Homeworks.  We have been blessed to send teams from 7 EFCA churches into the area on teams to help with debris clean up, food preparation, door to door assessments, and a variety of other tasks.  People have donated food, clothing, toiletries and time.  One lady I talked to yesterday said that this was not a curse for North Minneapolis it was a blessing.  She said to see White people working beside Black people beside Hispanics and Hmongs was one of the biggest blessings she had seen.  She said it opened up the eyes of the surrounding area that North Minneapolis was not a bad place to be.  That the people that lived there were just like the rest of us and all they needed was someone to show that they cared.  We are all the same in God’s eyes.  He does not see the color of our skin, He only sees the condition of our hearts. 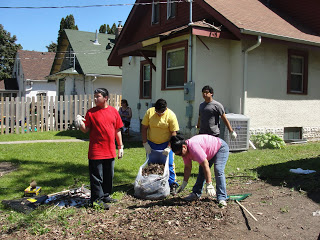 I have felt so blessed to be a part of the ministry to North Minneapolis.  We have had the honor of praying with the residents and seeing their hearts, the pleasure of laughing with them and the sorrow of crying with them.   We have worked beside them to clean up their yards and feed their neighbors.  And now as the efforts go from relief to recovery we hope to have the joy of watching this neighborhood come to life and hopefully for many to come to a saving relationship with our Lord and Savior, Jesus Christ.

Please join us in prayer for this community.  That the closeness with it’s neighbors continues far after the roofs are repaired and the homes are taken down and replaced.  Pray that the renters in homes that have been damaged beyond repair can find affordable housing.  Pray for continued safety for the workers and residents.  And most of all pray for hearts to turn to the only hope that anyone on this earth have…to Jesus.

Published by Rob and Jackie Passer

We are missionaries with ReachGlobal Crisis Response. Rob is a response facilitator; preparing work for the volunteers to do. Jackie is operations and volunteer coordinator; she will be managing the site book and coordinating the teams with schedules, meals and sleeping arrangements. View more posts