"I worked harder than you today!"

Today was spent at the orphanage we went to for a short time yesterday.  The guys were assigned several projects that needed to be done around the compound and the women did a VBS and spent time with the kids.  It’s a tie for who did more more….Paul or Rob or Scott or Andrea or Jackie…..it was the standing joke of the day by how dirty our shirts got.  Scott won the dirtiest shirt contest so I guess he did more work.  Paul and Jackie had the cleanest shirts…at least on the outside!  It was in the 90’s for most of the day…..

The guys list included repairing a roof with some tarps, digging out some trees that were in the way, drying out some huge tarps and tents and then folding them up and taking down a shower.  Everytime we walked by them they were busy at work with several children watching or “helping” them.  Rob and Paul were in their element doing construction work while Scott tore down the shower.  Scott and the little boys were in charge of folding up the tents and tarps.

The electricity is not on city power anymore so I will have to finish this tomorrow.  Please pray for spiritual health for the team and for safety tomorrow as we put up 5 Samaritan’s Purse shelters.  The heat begins to get to us after a little while.

This is the continuation of yesterday.  The women did a Noah’s Ark VBS for the children.  We had them in groups of 2-5 as they were able to come.  Some kids were in school (school held right at the orphanage), some girls were getting their hair done, some were just playing, and the boys were playing with a fire and building a fort in another area.  Boys and girl are separated at t his orphanage for most of the day after a certain age.  The babies are all in one room along with some handicapped children and there were a few babies in the little boys room too.

Andrea read a book on the Noah’s ark story.  It was mostly just a shortened version according to the age of the children.  And they all wanted to point out the names of the animals.  They taught us Creole and we taught them English, although many of these kids knew a good deal of English.  We then did a small craft project and talked to the kids.

This is quite the operation.  There are 43 kids here and each child is up for adoption.  Some of them have been adopted and are waiting for the paperwork to go through and some may have little hope of being adopted.  There are 3 severely handicapped children that are absolutely amazing.  Their stories are heartbreaking but the joy on all of these kid’s faces is evident.  Jesus is taught to them all.  They walk around singing worship songs in English and you know that Jesus is protecting them and the Holy Spirit has filled this place. 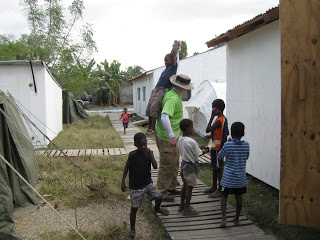 Please pray for this orphanage called Operation Love the Children of Haiti Incorporated. Pray for families to adopt these kids and pray for Jasmine and Greg who run this orphanage.

Posted by Rob and Jackie Passer on February 8, 2011 in Uncategorized

2 responses to “"I worked harder than you today!"”